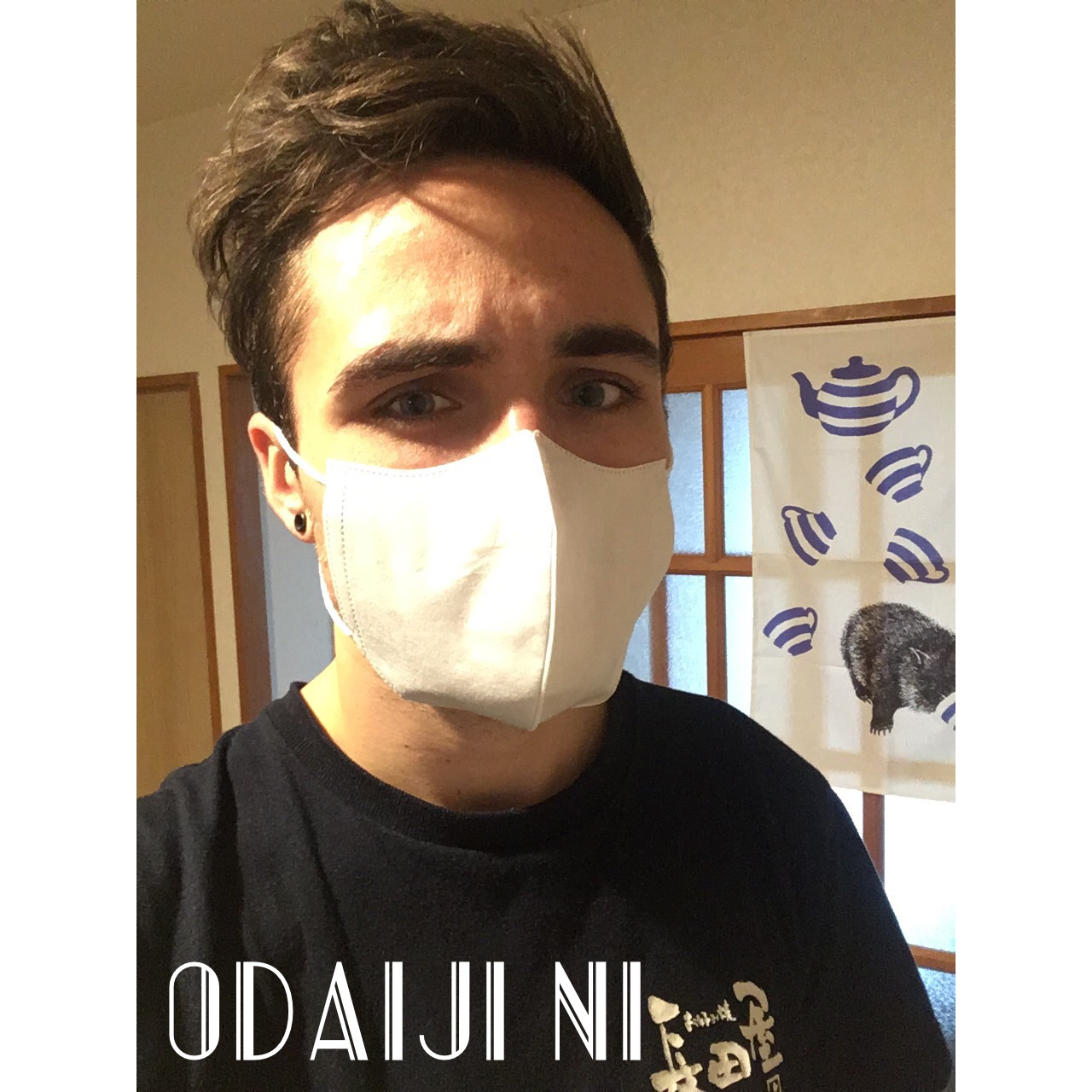 I’ve been visiting Japan since I was 15 years old and each time I return I am still nowhere closer to understanding the mystery surrounding the iconic ‘face mask’. Everywhere you go, crowds of people line the streets donning surgical masks; mimicking some eclectic flash mob.

In childhood, said masks symbolised sterile environments or bacteria-ridden procedures.  My evil orthodontist or the nurse who froze a wart off my knee wore these personal protective equipment.  In later years I would come to work in a veterinary clinic and nurses and vets alike would wear these masks in theatre or during certain dangerous procedures.  I would strap a mask to my face during quarantine events such as kennel cough or when dealing with young unvaccinated patients.  These masks served a purpose under dire and life altering circumstances. So why do people in Japan wear them as casually as wearing a pair of glasses?

Teachers and superiors, when asked about this odd phenomenon, would explain that residents of Japan were afraid of pollution and radiation caused by smog, power plants and any other carcinogenic chemicals drifting through the streets of this over populated country.

Each time I visited Japan I would secretly try to investigate the truth behind the mystery, never actually asking individuals for fear of accidentally offending somebody.  After moving to Japan I would still wonder what secrets could lie behind the marvel, until one day I was asked to wear one myself…….

Tokyo is extremely cold in the winter and the combination of a lack of central heating and double-glazed windows brews up a nasty recipe for a festive based illness; especially when mixed together and cooked for 20 minutes each morning during the commute to work.  Trains become breeding grounds for newly discovered bacteria and suddenly I feel fortunate that we lack the ability to see the particles spewing out of each individual standing at close range of me in those sardine tins on tracks.

Inevitably I succumbed to my first ‘Japanese cold’ and was sent to the nurses office where they decided to send me home for fear of infecting other colleagues or students.  Before setting off, the nurse told me to seek further medical assistance and to purchase some masks so as not to infect other people around me. ‘HALLELUJAH!!!!’ I thought.  The Holy Grail of information has finally been revealed to me during the one time I lack the energy or enthusiasm to celebrate after many years of shortcomings.

“Odaiji ni” she shouted at me as I left the office.  What a serendipitous expression this turned out to be.  I turned to my dictionary as I glumly walked away and upon discovery, was suddenly uplifted at such a powerful new phrase added to my repertoire.  Perhaps it was my state of delirium, but this simple phrase seemed to add some sort of substance to the situation; making me feel a tad better if only for a moment.

En route home I stopped by my local pharmacy to pick up some medication and my first ever masks.  Weirdly excited I found the mask section (yes there was an entire section) and was blown away by the multitude on offer.  The woman behind the counter sensed my confusion and came over to offer assistance.  I explained that I was sick and that this was my first time purchasing a mask and she recommended the best model accordingly.  I noticed as she passed me the packet that it was M size, I explained as best as I could that my head is quite the vast globe to which she chuckled and swapped them for the XL size.

I paid the woman and she asked if I needed help putting on the mask to which I nodded solemnly.  She smiled and carefully opened the packet, pulling out one mask which was then opened, revealing the white goods inside.  She hinted for me to remove the mask and acted with her hands how to open it up, place it over my nose, pinch the bit of metal inside and pull down the concertina of fabric on each side to fit accordingly over ones muzzle; not forgetting to place the straps comfortably behind my ears.  It fit perfectly and at once I felt like I should be in some kind of apocalyptic video game, shooting zombies and rabid dogs as I make my way through an abandoned hospital. “Odaiji ni” she announced as she beckoned me out of the store. I was once again struck by this new magical phrase.

As I walked home I felt as if everyones eyes were on me until I noticed that in fact nobody even batted an eyelid.  The next day on the train commute to work I wore my new comrade and was gobsmacked to discover that, whilst without previously wearing a mask people would glare at me for coughing or sniffling, today with a mask securely protecting other passengers from my germs, nobody even acknowledged my existence.  I was like a mucous ridden Harry Potter under his cloak of invisibility; impenetrable to diseases and bacterium of all kinds.

As each day went by, I would walk to the station bare-faced, soaking in all that well required Vitamin D before retrieving my protective shield from my bag and placing it over my face as the train rolled into the platform.  Three months later, this has now become my morning routine and I swear by it.  Whether or not it actually protects me from the masses crammed into each carriage, each coughing, sniffling, sneezing and just generally breathing in my direction, or whether in fact it holds some kind of placebo effect is difficult to tell, but I have not experienced any such illness related symptoms since investing in this little white cloth of grandeur.

I recently visited a friends house for a party and as one of the guests walked in wearing a white mask, another offered a kind “Odaiji ni” to which the reply given surprised me profoundly……”Oh, I’m just wearing this for fashion….”

Years of wondering, hours of discovery, months of clarity and suddenly in an instance one second of pure pandemonium.

So it transpires that people can in fact wear these garments as fashion accessories.  I have since witnessed individuals wearing masks of all shapes and colours (the black ones actually look pretty awesome).  I’ve seen elderly citizens pad theirs out with extra cotton wool or with customised knitted outer parts.  My Vice Principle wore a mask for the first time last week due to hay fever, claiming that it protected him from the high pollen count.  I was even told by a student that wearing a mask helped to keep her skin moist and free of blemishes as she would not be subjecting it to the harsh elements.

So I guess there you have it, there is no right or wrong answer to this occurrence, it just is what it is, a culturally acceptable notion as common as wearing a pair of glasses or a woolly hat.  Whether or not the wearer is sick or simply wants to protect their face from harsh UV rays, the mask will sit as a constant reminder of the time I learned a new useful and significant phrase that for a split second made me forget my troubles and crack a cheeky smile.

One thought on “Odaiji ni”

This is a text widget, which allows you to add text or HTML to your sidebar. You can use them to display text, links, images, HTML, or a combination of these. Edit them in the Widget section of the Customizer.